The British School of Aromatherapy? 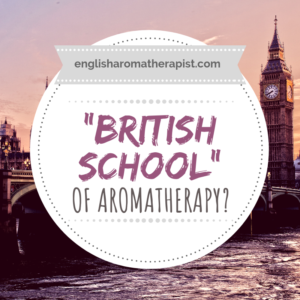 Ah, the old chestnut about different “schools of aromatherapy”.

Have you ever heard people claim “this is the French way to use essential oils – the British method is outdated!”

This is a common response to anyone who dares to criticise casual ingestion. In fact, the concept of “French” and “British” schools of aromatherapy is often used by MLM brands to justify internal use. Their reps are told that the so-called “British” method is conservative and outdated. They like to promote the idea that essential oils are commonly ingested in France all the time. In reality, essential oils are only occasionally prescribed for internal use, in carefully controlled circumstances.

Dr David Stewart is an American scientist who works closely with Young Living. In the Ancient Secrets of Essential Oils Movie (2016), Stewart discusses this concept of different “schools of thought” in aromatherapy. He claims the British think “that oils are intrinsically dangerous” and that we use “inferior grade” oils, which is why we dilute them before applying to the skin. 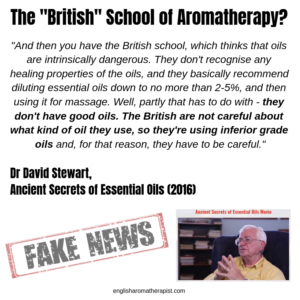 How did this myth start?

It’s not clear exactly who first came up with the idea of three “schools of thought” in aromatherapy. Sylla Sheppard-Hanger suggests it began in the “early 2000s” after a joke was made by Daniel Pénoël, a well-known pioneer of medical aromatherapy. As a result, the concept was quickly taken on by others, including Young Living.

Austrian-born Marguerite Maury is credited for bringing aromatherapy to Britain in the 1960s, with an approach that focused on beauty and massage. As a result, aromatherapy education in the UK tends to be combined with massage therapy. Traditional teaching states that essential oil ingestion is generally not advised unless under specific instruction from a qualified aromatherapist. This led to the idea that “British aromatherapy” is all about massage, dilution and no internal use.

Kurt Schnaubelt discussed the differences between “French” and “British” styles of aromatherapy in his book, The Healing Intelligence of Essential Oils, published in 2011. It’s a subject that’s also discussed by Shirley and Len Price in Aromatherapy for Health Professionals 4th Edition (2012), but they explain that the “French” approach is actually aromatic medicine, rather than traditional aromatherapy. Therefore, a practitioner should be appropriately qualified in aromatic medicine before jumping into internal use of essential oils. I’d hazard a guess that at least 99% of all Young Living reps are not qualified in aromatic medicine, despite acting as though they are!

Anyone who has studied a professional aromatherapy course learns there are three ways to use essential oils: topical application, inhalation and internal use. Education and training enables you to judge which method is appropriate. Somehow, these three methods have been labelled into “British”, “German” and “French” schools of aromatherapy. But, as this article explains, professional aromatherapy is actually about encompassing all three methods of usage.

Do they ingest in France?

It’s true that internal use of essential oils is prescribed in France. But this is only ever done in carefully controlled circumstances, and certainly not in the form of adding drops to a glass of drinking water. Internal use is only legally prescribed by qualified medical professionals who have undertaken advanced training. It would be used for a specific reason and for a limited period of time. The dose would be carefully calculated after a thorough client consultation. It’s a form of aromatic medicine, and cannot be compared to the kind of casual, excessive ingestion that’s recommended by MLM sales reps.

Sadly, the facts have been twisted into a belief that “the French ingest essential oils, therefore ingestion is FINE!” But, in reality, ingestion is something you should only do IF you know what you’re doing. It’s not as simple as just adding a few drops of oil to your water, or dropping them under your tongue. Aromatic medicine is far more complex than that. 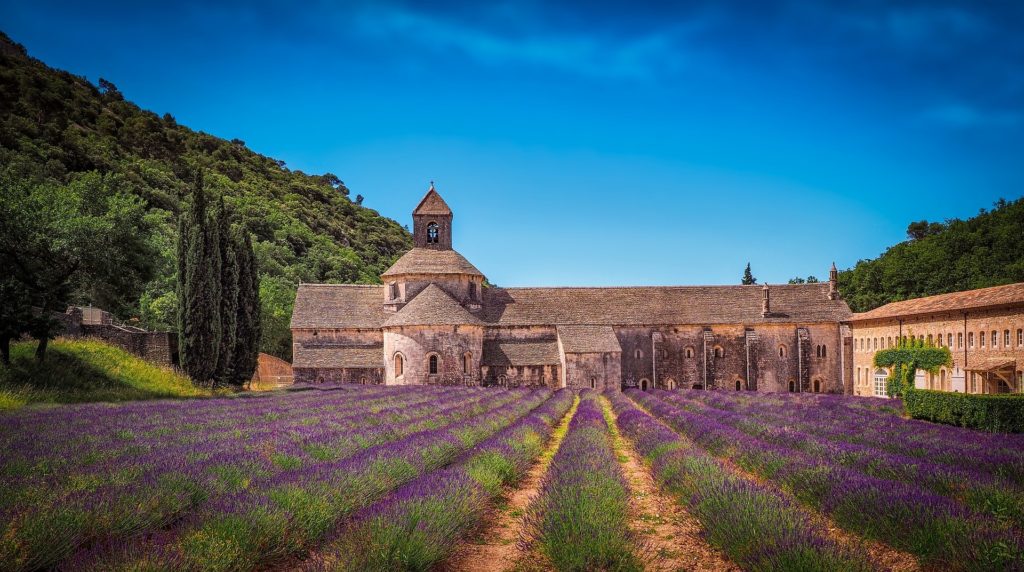 To ingest or not to ingest?

The current situation is that home users around the world are being encouraged to ingest essential oils on a daily basis, without any acknowledgement of their individual circumstances. The popularity of MLM brands has led to Argumentum ad populum – in other words, a “bandwagon fallacy”. If everyone else is merrily ingesting essential oils every day, then it must be okay! We have online “gurus” like Jen O’ Sullivan, who regularly discusses the “French model” of ingestion in her Facebook group of over 200,000 members. According to Jen, daily ingestion is fine – as long as you’re not ingesting more than 12 drops a day, and as long as you only ingest Young Living oils (no surprises there).

As Gabriel Mojay points out, there are many well-known British aromatherapists who teach and write about clinical methodology and internal use, including Rhiannon Lewis, Jane Buckle, Penny Price and Shirley & Len Price. In this interview, Robert Tisserand – arguably the most famous British aromatherapist – makes it clear:

“I have never said you should not ingest essential oils…I don’t believe it’s an absolute no-no. What I do believe is that you need to know what you’re doing. You need to know why you’re doing it; what dose you are taking; how long you are going to be taking it for; what the reason is.” (Robert Tisserand)

Martin Watt explains, “Despite the hype emanating from the followers of one or two French doctors, essential oils are NOT widely prescribed internally by their medical profession. However, clearly that method of use does have benefits, provided adequate medical diagnosis has been undertaken, and provided Internationally acceptable safety levels are complied with.”

When it comes to internal usage, proper education is vital. No-one should be recommending internal use without appropriate training. Martin Watt says:

“few aromatherapists are what I would consider adequately trained in pathology and diagnosis. Those subjects are critically important, because if you do not know how to differentiate between someone having a simple stomach upset, or a major gastrointestinal tract disease, then giving oils internally is playing with fire.” (Martin Watt)

If you’re still convinced that French people are lavishly ingesting essential oils all the time, I’d strongly recommend reading this interesting article which gives an enlightening insight into the current state of French aromatherapy. As Hana Tisserand writes, “There are some assumptions about French aromatherapy. The so-called “French school” is usually linked to the use of large amounts of essential oils, often via ingestion.” After visiting the Grasse Phyt’Arom 2017 conference, it became clear that:

“As for the “French school”, what is actually being taught in French aromatherapy schools is also much more sensible and safety-conscious than we had imagined…Aromatherapy in France is changing…We listened to speaker after speaker talking about proper dilution, the importance of safety. Some even advocated for the preference of topical application and inhalation over ingestion.” (Hana Tisserand)

Aromatherapy is a multi-faceted and ever-evolving modality. There are differences in how it’s practised around the world, and internal use is certainly more popular in France. But using this as justification to casually ingest essential oils at home is stretching the truth a little too far. Most people in France are not using essential oils the way MLM brands would have you believe.

Ultimately, people are free to choose how they use essential oils. If an individual wants to ingest essential oils every day, that’s entirely up to them. If people want to justify it to themselves by believing it’s safe “because it’s the French way”, that is also their choice to make.

But at the moment, I feel people aren’t being told the full story. We need to make an informed choice – one based on facts, not marketing material. Separating fact from fiction isn’t always easy, but I hope this blog post has helped to make things a little clearer.

The ‘British school’ of aromatherapy: time for some real time facts – Gabriel Mojay

‘British vs. French Aromatherapy’ – a myth… or a smokescreen? – Gabriel Mojay

The Myth of Aromatherapy Schools of Thought – Kayla Fioravanti

Issues on internal use – Martin Watt

What to Read News:

7 Responses to The British School of Aromatherapy?