Essential Oils in the Bible – really…? 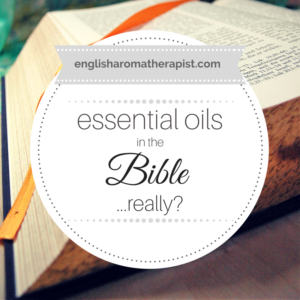 Let’s discuss the issue of essential oils in the Bible.

It’s often claimed that essential oils were used in Biblical times. Depending on whose statistics you believe, essential oils are supposedly mentioned between 200 and 600 times and feature in 46 books of the Bible.

Alongside these claims, you’ll see essential oils frequently referred to as “gifts from God”.

This link between essential oils and the Bible appears to be very common over in the US – unlike here in the UK, where mainstream marketing tends to be more secular.

Why does this sit uncomfortably with me? Let me start off by clarifying that this is not any kind of religious criticism.

What I dislike is the way that facts are twisted to suit an agenda. Sales reps are claiming that essential oils were used in Biblical times. But this is purely marketing spin for the purposes of selling more essential oils.

The truth is this: modern day essential oils did not exist in Biblical times.

Were aromatic oils used in Biblical times? Yes, but this was likely to be infused oils, not the highly concentrated steam-distilled essential oils we use today.

As Robert Tisserand points out, steam distillation was only invented around 1000 years ago. The “mentions” of essential oils in the Bible are related to the resins, herbs, incense and infused oils that were used in those times.

Often, the supposed “mention” of an essential oil is more likely referring to the actual plant or tree itself (e.g. cedarwood, cypress, etc.)

I’ve seen people promote frankincense and myrrh oil as being comparable to the gifts brought to baby Jesus in the manger. But one thing’s for sure – baby Jesus would not have been presented with little bottles of steam-distilled essential oil.

This argument is brilliantly shut down by straight-talking essential oil expert Dr Robert Pappas, who points out that modern steam distillation wasn’t even invented in Biblical times.

The idea that frankincense is safe enough to use neat on children “because it was used in the Bible” is just false.

We’ve talked about logical fallacies before, and this is yet another example.

It’s an appeal to nature by claiming that because something is natural and “God’s medicine” that it’s therefore safe.

It’s also an appeal to tradition by claiming that something is validated purely because it’s been around since Biblical times. 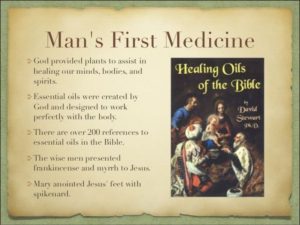 We’ve all seen marketing claims that essential oils are 100% safe, free of side-effects and that it’s impossible to be allergic to them – all of which are false statements.

In my opinion, playing the Bible card to sell essential oils is just a disingenuous marketing trick. I think it’s also a way of legitimising something that may initially be feared as being “occult” or “pagan”. There’s an underlying message of “if they were used in the Bible, they must be fine!”

This is then extrapolated to imply that – because they’re in the Bible – it’s therefore fine to use essential oils without caution, ingest them on a daily basis, and rub undiluted onto your skin.

There are a couple of well-known online “Drs” that really push the whole Biblical side of essential oils – I guess it must be working for them!

If you must bring religion into your marketing, please make it accurate. Yes, they were aware of plant medicine in Biblical times and used aromatic oils. This does not mean that modern steam-distilled essential oils were used in the Bible.

One Response to Essential Oils in the Bible – really…?