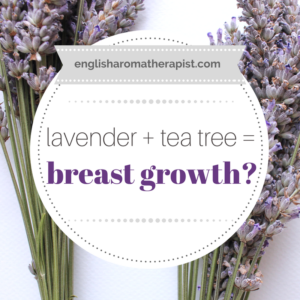 Earlier this year, essential oils hit the headlines when it was reported that using lavender and tea tree oil could cause breast growth in young boys.

Several months on, I’m still getting asked about this, and it’s a question that crops up on social media all the time.

In short, several experts have debunked this claim, so it’s not something you need to worry about.

But I thought it would be useful to compile a few relevant links that address the issue. It’s handy to have this information in one place for the next time someone asks about it. These kind of rumours tend to keep recirculating!

This debate first popped up back in 2007 following a study by Henley et al. which suggested a link between lavender and tea tree essential oils and breast growth in young boys. The conclusion was that the oils had an oestrogenic (estrogenic in US English) effect on the body.

However, this study was criticised by Robert Tisserand, who wrote a detailed rebuttal of the claims back in 2013. I’m guessing he hoped the issue had been put to bed.

But in March 2018, a new report brought up further “evidence” of a link between prepubertal gynecomastia (breast growth in young boys) and the chemical constituents found in lavender and tea tree oil.

The news was leaked to the press before the full results of the study were presented at the Endocrine Society’s annual meeting in Chicago. In the meantime, the mainstream media went into overdrive, publishing a raft of sensationalised articles with titles like “Lavender could give men MOOBS” which flew around social media like wildfire. News of the report’s “findings” kicked off hysteria among essential oil users.

What’s more, the press release also warned that these chemicals appear in dozens of other essential oils, therefore throwing the entire aromatherapy industry into disrepute. It ended with the statement “Essential oils are available without a prescription and are not regulated by the U.S. Food and Drug Administration. Thus, the public should be aware of these findings and consider all evidence before deciding to use essential oils.”

A conspiracy theorist might say it was a successful attempt to dampen the flames of the burgeoning natural health industry – scaring us to run back to doctors and their prescription pads.

Robert Tisserand was quick off the mark to post an official response to the news story, and you can watch his full statement in this video:

If you don’t have time to watch the full video, his main points are:

Robert Tisserand isn’t the only expert to disagree with this story. Dr Robert Pappas criticised the “science” behind this report, and certainly didn’t hold back when he wrote his opinion piece on Facebook here. He argued that we don’t even know if real essential oils were used in the study.

Salvatore Battaglia also wrote a great blog article to further illustrate the flaws in these claims that were reported in the press.

There is no evidence that using lavender or tea tree oil will cause gynecomastia. The media love to grab a soundbite and spin it into a sensational headline without telling the whole story. Just another example of irresponsible reporting in the press.

Yes, we should be concerned about endocrine disruptors – and these hormone-disrupting chemicals are all around us – but essential oils are probably the least of our worries in this instance.

We should always exercise caution when using essential oils with children, but this report is NOT a reason to avoid using lavender or tea tree on boys. As long as you’re using essential oils appropriately and within recommended safety guidelines, this isn’t a cause for concern.